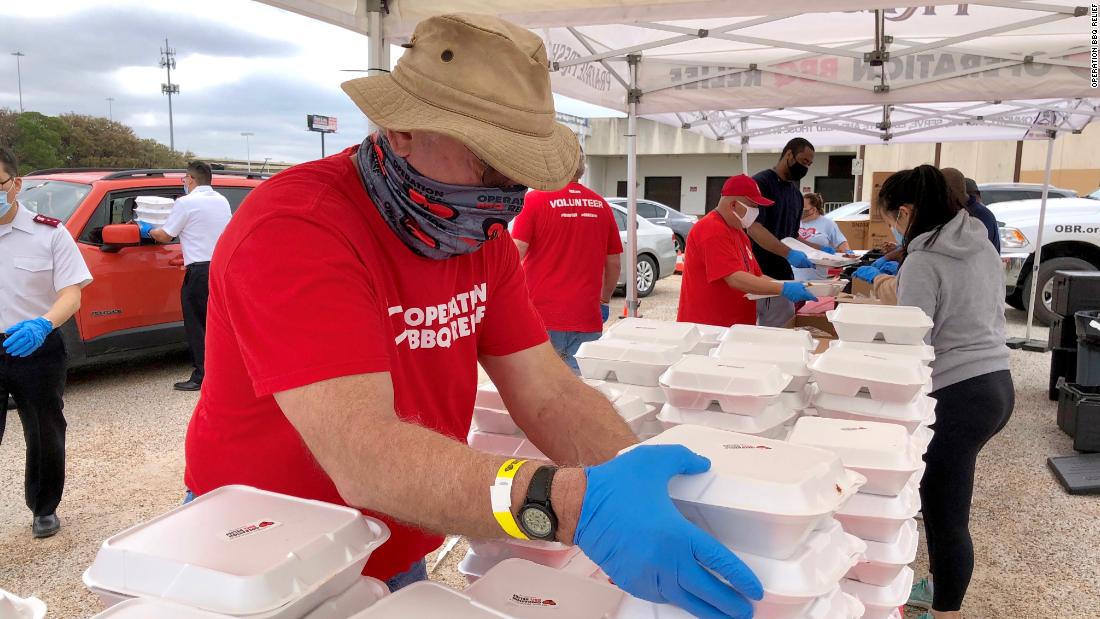 For those on fixed incomes, or already struggling to make ends meet, these challenges are devastating. But this week in Houston, one group provided its unique brand of support: free, hot BBQ meals.

Hays, a 2017 CNN Hero and competitive BBQ pitmaster, helped start the group to feed people impacted by the Joplin, Missouri, tornado in 2011. Since then, the organization has deployed to dozens of disasters in 30 states — including Houston after Hurricane Harvey.

But the devastation from last week’s winter storm is different than what the group usually encounters.

“You can’t see the death and destruction like when it’s a hurricane or a tornado. But the need is definitely there,” said Paul Carnell, a Houston resident and longtime Operation BBQ Relief volunteer. “Most of the meals we provide are for people who are paycheck to paycheck.”

“A lot of these people we’re feeding right now were already food insecure,” said Hays, noting that job losses during the pandemic have increased the need. “Now, going through a week without grocery stores or food banks open, they definitely don’t have anything in the cupboards.”

Last weekend the group enlisted a local BBQ restaurant to start cooking meals, and by Monday Operation BBQ Relief’s smokers were set up at a local recreation center, where they eventually cranked out 5,000 meals a day.

Partners like the Salvation Army and the City of Houston organized a drive-through meal distribution at a local mall, while volunteers from CrowdSource Rescue, a local nonprofit, picked up and delivered meals directly to those in need.

“We are getting requests from single families but also from assisted living facilities, senior homes, veterans’ homes, homeless shelters,” said CrowdSource Rescue co-founder Matt Marchetti. “Those places need 200 to 500 meals at a time.”

Marisol Solis Flores, a volunteer with the group, delivered hundreds of meals during the past week.

“They are just so thrilled to receive these meals,” Flores said. “Some of the people were without water and electricity for several days like the rest of us, but they are much more vulnerable.”

Juanessia Hall requested meals for her neighbors at a low-income housing complex that lost power and water during the storm.

“When the food got here, we set it out on the table and were praising god, blessing the food — it was awesome,” Hall said.

“It was probably the first hot meal they had in several days,” said Brenda Nirider, who works at a senior apartment complex outside of Houston. “It would’ve been helpful to even get lunch meat sandwiches, but a hot meal?…It meant a lot to them. And BBQ is a favorite here in Texas.”

On Wednesday, Operation BBQ Relief served its 9 millionth meal since the effort began almost 10 years ago. The group plans to continue their work in Houston through Sunday.

Both Hays and Carnell are proud that their meals have helped millions of people through difficult times.

“It’s my way to keep giving back,” said Carnell, a retired Army medic. “For me, it’s about service to country…You’ve got to step out of how your life is and put yourself in someone else’s shoes. Build a little karma and keep it in the bank.”