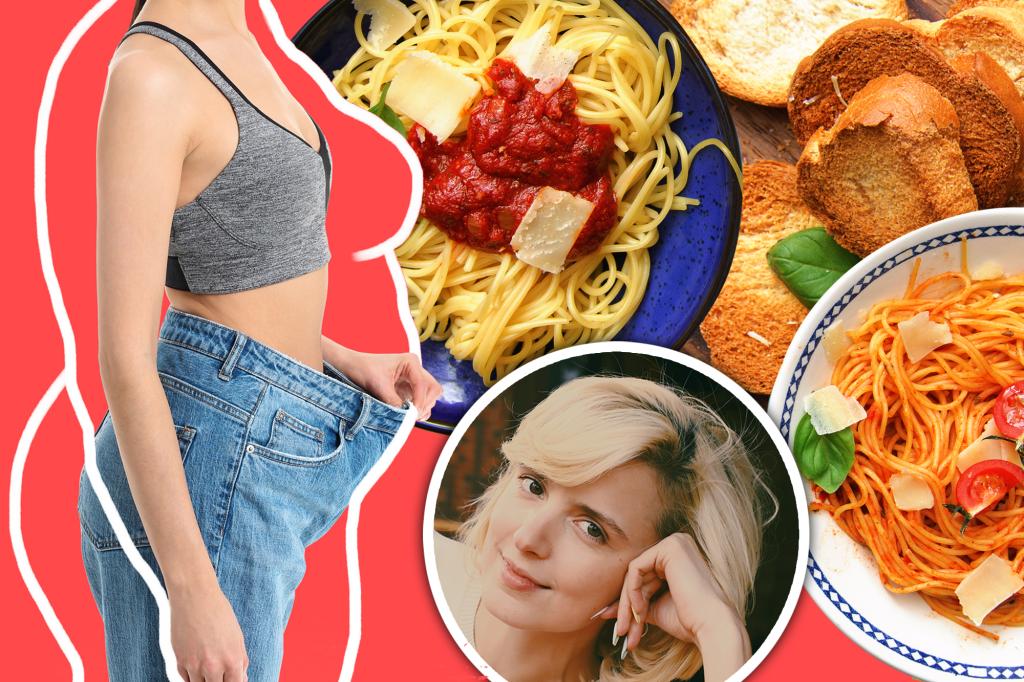 
Move over, gluten, there’s a new bad guy in town: Glucose. But the good news is, you can eradicate its acne-inducing, sleep-wrecking, fat-gaining effects and keep the bread basket on the table.

While glucose has always been tracked by people with diabetes and hypoglycemia, it also has a profound effect on the way all of our bodies look and feel. As glucose, otherwise known as blood sugar, naturally rises and falls throughout the day, studies show that modern food habits can create a “glucose roller coaster” of rapid spikes followed by rapid dips. This can lead to what’s colloquially known as a sugar high: Feeling wired, then irritable and exhausted.

Jessie Inchauspé, a biochemist, unpacks solutions in her new book “Glucose Revolution” (Simon & Schuster), out April 5. Known as the Glucose Goddess on Instagram — where she has more than 400,000 followers, including Hilary Duff, Jessica Alba and Marion Cotillard — Inchauspé is already a sensation in other countries including England and Australia.

And while her background is in biochemistry, her exploration into the effects of glucose are profoundly personal.

At age 19, thrillseeker Inchauspé, who grew up in Paris, was vacationing in Hawaii when she jumped off a cliff into the crystal blue lagoon below. But as soon as her body made contact with the water, Inchauspé knew something had gone terribly wrong: In a freak accident, the impact caused her thoracic vertebrae to shatter. Even after surgery, Inchauspé said she felt horrible.

“I was at a point where I just wanted to die. I was so confused about how to take care of my body, how to be healthy. It was really a lot of suffering,” she told The Post. “And the only option I had at that point was to try to figure out how to feel good, because that was, to me, the most important thing in the world.”

After graduating with a Master’s degree in biochemistry from Georgetown, Inchauspé began at an internship at 23andMe, the biotechnology company that provides DNA genetic testing from home. One project within the development team was utilizing continuous glucose monitors, like many diabetics wear, to explore food response in people who didn’t have blood sugar disorders.

Inchauspé volunteered as a subject, and was shocked to see how clearly her well-being connected to glucose spikes.

“That connection was life-changing for me because in the past I had just seen my body as this black box that I didn’t understand,” Inchauspé said.

And the data wasn’t as straightforward as she anticipated. Inchauspé assumed that a carb-heavy meal would automatically lead to a spike. But that wasn’t the case.

One day, she would eat nachos and see a huge blood sugar surge. Another day, the nachos would barely affect her glucose levels.

For a healthy non-diabetic, fasting blood glucose levels should be less than 100mg/dL; two hours after eating, it should be under 140. But even “healthy” foods can lead to large surges: A large piece of fruit could cause your blood sugar to spike up to 60 mg/dL above your baseline. While it may go back to baseline within the next two hours, that surge, Inchauspé said, can lead to feelings of fatigue — as well as wreak internal body havoc.

That’s because glucose is an immediate source of energy, which is great if you’re planning to run a marathon after you eat a bunch of pasta. But if you’re not, the hormone insulin will work to transform the glucose into fatty acids, which are then stored as fat.

Using herself as a guinea pig, Inchauspé came across strategies to keep glucose spikes at bay. These hacks, she said, allow people to eat the foods they love, quit counting calories, and experience better skin, better sleep and more stable moods.

And while Inchauspé doesn’t call her advice a diet, she does say that people have lost significant amounts of weight following her hacks.

“It’s really about health first and foremost,” Inchauspé told The Post. “In many people, I will say, weight loss is often a side effect of getting you back into balance.”

Inchauspé began sharing her findings on Instagram (@glucosegoddess), with hand-drawn graphs to illustrate her own blood-sugar levels. As the account grew in popularity, she realized people don’t need a glucose monitor to implement the strategies.

While Inchauspé had a continuous glucose monitor, the FDA approves CGMs only for people with diabetes. Still, it’s possible to get an off-label prescription from a doctor for a device. Some startups like NutriSense and Signos offer CGM technology to non-diabetics, starting at around $100 a month. Glucose can also also be measured via over-the-counter test strips and a monitor that costs as little as $16. Without insurance, test strips can cost .30 cents or more each — about $35 for 100 strips — and you’ll need to prick your finger with a lancet and take a small blood sample every time you test.

“A glucose monitor helps you visualize and keeps you accountable, but the hacks themselves are enough to see all the benefits,” said Inchauspé, who rarely wears one now herself. And while the health benefits — including, yes, weight loss — are huge, Inchauspé said one of the biggest benefits comes from reframing your relationship with food.

“I hear a lot from people that they would feel really guilty for wanting to eat a cookie, at 4 p.m.,” Inchauspé told The Post. “And they thought, ‘Well, if I can’t resist it, it’s just my fault. It’s because I don’t have enough willpower.’ But what we know from the science is that these cravings for foods between meals, especially sweet foods, are actually a direct consequence of a glucose rollercoaster.

Inchauspé added that people will notice effects of more consistent glucose levels almost immediately, and that being aware of glucose levels doesn’t mean giving anything up.

“I’m a big pasta fan and chocolate fan. I love, love, love spaghetti. I love chocolate cake. And so I just learned how to eat everything I love without creating a big glucose spike.”

Inchauspé advises eating fiber first, followed by protein and fat, and finally starches and sugars. That’s because fiber breaks down slowly in the digestive system — while starches are turned quickly into glucose, leading to a spike. Eating fiber first slows down the speed at which you digest starches, so glucose trickles into the bloodstream more slowly than if you had eaten the same foods in reverse order. This may mean switching up the way you eat. For example, instead of a tuna salad sandwich, eat any greens first, followed by the tuna, then finish up by eating the toast. You should see a lower, slower glucose rise (see graph above).

Start with a Salad

Beans, leafy greens and veggies such as veggies like broccoli, beets and carrots are all great sources of fiber, which can keep your glucose from spiking once you consume carbs (see graph above). Ideally, you should eat the same amount of veggies as starches — but even if you can’t have a one-to-one ratio, some veggies prior to your main course are better than none, said Inchauspé.

Take It Easy at Breakfast

Greek yogurt, avocado and eggs are all solid options to start the day and maintain a steady blood sugar level. That’s because your blood sugar is lowest in a fasting state, like after you’ve slept overnight. Eating a carb-heavy breakfast not only causes a glucose spike (see top portion of graph above), it triggers insulin production that leads to carbs being stored as fat. The worst breakfast options, according to Inchauspé, are cereal or sweet delights, like chocolate croissants or fruit smoothies.

Even “healthy” sugars — like honey or stevia — will heighten your glucose levels. Instead, Inchauspé recommends using artificial sweeteners as a stopgap to wean yourself entirely off the sweet stuff.

Save the Sweet Stuff for Dessert

Instead of having a standalone cookie, or even a bowl of cut-up fruit as a midday treat, Inchauspé suggests saving yourself for an after-meal sweet treat. You want to maximize the amount of time your body is in a ‘postprandial state’ — the time it’s metabolizing what you’ve eaten. Having a sweet treat at the end of a meal will minimize the glucose spike and even bring down your levels (see graph above).

Add Some Vinegar to your H20

Drinking vinegar before a carb-rich meal can minimize a glucose spike. That’s because the acetic acid in vinegar temporarily inactivates alpha-amylase, an enzyme that aids in transforming foods into glucose. Any vinegar will work, Inchauspé said, but apple cider vinegar might be the most palatable. She advises mixing about a tablespoon of vinegar in 8 or more ounces of hot or cold water. Drink 20 minutes before eating or with your meal. Adding vinaigrette to your salad also counts.

Taking a 10- or 20-minute walk after you eat can also minimize a glucose spike (see graph above). That’s because the glucose is immediately used by muscles as fuel, so it won’t accumulate. Inchauspé’s research recommends moving within a 70-minute window after you eat.

In general, the best way to avoid a glucose spike is to skip snacks all together in favor of robust meals that feature fiber, protein, fats and some starches and sugars. But if you can’t resist, skip the sweets and go savory. Inchauspé recommends cheese, nuts, Greek yogurt, or a hard boiled egg.

‘Add Clothes to your Carbs‘

A common phrase on the Glucose Goddess Instagram account, “adding clothes” to carbs means adding fats, proteins or fiber to the carbs you plan to eat to reduce how quickly glucose is absorbed into the body. For instance, adding protein-rich peanut butter to a slice of toast or a piece of fruit (see graph above). This also applies to “good for you” carbs like brown rice, which Inchauspé advises mixing with veggies, nuts or even cheese.

The Glucose Goddess’s Meal Plan for Flattening the Glucose Curve

Lunch (eaten in this order):

Dinner (eaten in this order):