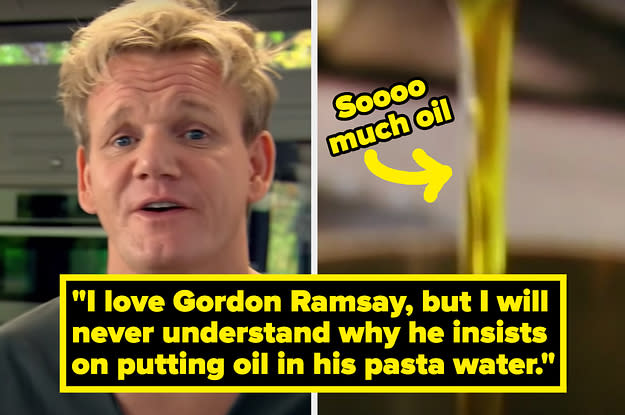 
A little while ago, Reddit User u/audreyhorn666 posed the question, “What are your cooking unpopular opinions?”

And there were so many great responses! Here are some of the top-voted answers:

1.“I will always consider Kraft blue box mac ‘n’ cheese superior to anything I can make from scratch. I don’t care whose recipe I’m making, how many different cheeses are in it, or how scrumptious the garlic-butter breadcrumb topping is. Gimme that Kraft.”

2.“A steak is only cooked wrong if the person eating it is unhappy. Too many steak snobs get upset that everyone doesn’t like their steak rare/medium rare and without a sauce.”

3.“Cast iron is not all that great. For 75% of my cooking, I use my 3-ply steel. For the remaining, a cheap non-stick pan is better than cast iron. I have a cast iron pan; I sometimes use it. But after getting proper 3-ply, I hardly see any use for my cast iron anymore.”

4.“American cheese and processed American cheese food product are A.) two different things and B.) both valid choices for certain applications. The former is essentially a very mild cheddar that you get sliced by the pound at the deli counter, and it is good for things like sandwiches. The latter is the plasticky, individually wrapped Kraft Single that melts beautifully in a grilled cheese or on a burger. People who shit talk American cheese are usually talking about Kraft Singles, and they’re usually using it for the wrong purpose.”

“My husband likes making fancy grilled cheese with really nice cheeses, but none are as good as a good old-fashioned Kraft American cheese grilled cheese.”

“Deli American cheese is glorious. I eat it by itself or with a piece of bread as a snack.”

6.“Turkeys should be grilled. I do my Thanksgiving turkey in an hour and 30 minutes on the grill. No bird should be roasting all day in the oven. That’s why people hate Turkey – it’s always dry and overcooked. Mine comes out juicy like a rotisserie chicken.”

7.“When baking, I typically lean towards box mixes. They’re cost effective, consistent, and you can add one or two additional ingredients to really jazz it up.”

“I’ve never gotten the hate for them. They’re the product of thorough research to recreate the taste of what we would imagine as the quintessential cake! And if you’re not making the kind of baked good that has a specific process/is leavened/requires a sabayon or a meringue, then it’s very handy to be able to fast forward through all the fussy, bowl-dirtying dry ingredient measuring.”

8.“People make fun of them, but I kinda like single-function kitchen gadgets. I know I can just microplane garlic instead of using a garlic press, or use a paring knife instead of a cherry pitter, or anything besides an egg separator. But these are so much more convenient.”

9.“Making pesto is rarely worth the effort and money. Pre-made pesto all the way.”

“The only time it’s worth it for me is if I grow my own basil and use a food processor. Otherwise, basil is way, way too expensive at the store to bother.”

10.“I love instant potatoes. I’m a potato fiend and can’t be bothered to go through the entire process of making mashed potatoes when instant potatoes will solve the craving in a minute. Add some butter, sour cream, or cheese, and you’re in business.”

11.“People are overly obsessed with precise amounts, exact spice mixes, following precise procedures, and having only ‘authentic’ ingredients in dishes. Rice will come out fine with various amounts of water. An Indian curry is curry even without all the ‘real’ spices. Pizzas with pineapple or chicken are still pizzas and still delicious. It’s still Carbonara with a different cheese, different kind of smoked meat, and heavy cream.”

“Some things (baking especially) can be very sensitive to specifics. But most things are not; if you find ten recipes with ten different ways of doing something, it usually means the details don’t actually matter.”

12.“I make nearly everything from scratch. I’ll slave over ramen broth, grow my basil for pesto…but making pasta from scratch is a gigantic pain in the ass. Sometimes, it’s not even as good as the dried stuff.”

“The actual act of making pasta is pretty easy. But it does require a big mess of flour, which is a huge pain to clean up. I’d make pasta a lot more often if it didn’t mean scraping dried flour paste off of everything.”

13.“I hate peeling and chopping garlic. And cleaning presses is even worse. Just keep a jar of minced in the fridge.”

14.“Cheese and seafood can go together. Preferably in a pasta dish, I like this combo a lot.”

“I used to watch A LOT of the Food Network. On competition shows, people would get crucified if they even suggested it. Shavings of Parmesan cheese on a shrimp pasta dish would almost always get you eliminated. These shows act like cheese and seafood is just one step above serving raw chicken. It’s wild.”

15.“I’m just not into ‘plating.’ I’m not even talking about the trend of serving food on things that food should not be served on. Every time I watch a show about the highest tiers of chefs, and they put together a dish that looks more like a work of art than dinner, it just doesn’t look appetizing to me. I want my food to look like food.”

“I definitely understand this. When you order a dessert from a restaurant, and it’s like two feet tall and super intricate, it makes you feel bad for destroying it. Just give me a big, fat slice of regular old cake on a plate so I can shovel it into my face as quickly as possible and not feel like I’m shredding the Mona Lisa!”

16.“Leftover pizza reheated in the microwave is even better than fresh. Frozen, delivery, homemade doesn’t matter. Microwaved pizza gets soggy and floppy, and I love it.”

17.“Veal is pointless. Beef has much better flavor, and pork can be substituted in most circumstances for a better/cheaper result.”

18.“Coconut milk from concentrate powder is often better than fresh or canned. It has a stronger flavor and smooth, silky texture. Add a tablespoon into curries for a lovely, thick, silky sauce.”

20.“Sometimes when I’m tired and lazy, I put the food in the oven when I turn it on. It’s preheating, so I smudge the cook time a little. It doesn’t make a difference for a lot of simple baked dishes, and it’s one less thing I have to do.”

21.“Thin and crispy smashed burgers are alright, but I swoon over a thick, tender, juicy patty. The kind that drips juice all over the bun and into the sauce and just makes a big, delicious mess.”

22.“I hate my vegetables being crunchy. If I make broccoli, it needs to be mushy. Green beans? I’ll toss them in oil and do a pan fry until they’re not crunchy anymore. Carrots get roasted or slow-cooked until they pretty much melt in my mouth.”

23.“Instant ramen is awesome. And the Cup O’ Noodles is way better than the one not in a cup. But one of my favorite things to do is to crush up instant ramen, sprinkle it with that 99% sodium seasoning, and shake it up. Ramen chips!”

24.“Pumpkin spice is seriously one of the worst things to happen to groceries. I get it in pastries and coffee. But Cheerios? Cough drops? Cheese? Jell-O? Butter? Just no.”

25.“I barely care about the temperature of my food most of the time. Unless it drastically changes the texture or flavor (or safety, obviously), I’ll often eat food that is anywhere from room temperature to cold, regardless of what it is.”

“Make steel-cut oatmeal. Cook with a little butter and enough salt to make the water pleasantly salty to taste. Spread the oatmeal on a plate, and seriously give it a good solid coating of black pepper. Then, top with an over-easy egg and breakfast sausages. The savory pepper oatmeal is my favorite breakfast on earth.”

27.And finally, “I love Gordon Ramsay, but I will never understand why he insists on putting oil in his pasta water. It keeps the sauce from sticking to the noodles. It’s not even necessary to keep the noodles from sticking together. I really don’t see any benefit, but he always does it.”

Do you have any controversial cooking opinions? Share your thoughts in the comments below!

Some responses have been edited for length and/or clarity.